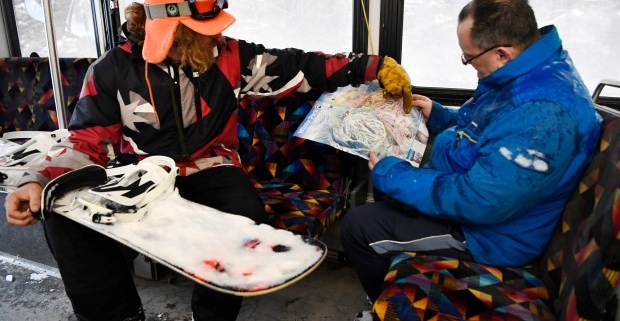 When the bus rolls up at 6 a.m. in the crisp mountain air, Christian Tichy often is among those who climb aboard to head to work, snowboard in hand.

“A lot of times, I can’t bum rides off my friends in the morning, so I’ll take the bus from Granby,” says the 23-year-old lift operator at Winter Park Resort. “I’ll get to the resort at 7, do all my stretching and whatnot, and get ready for the morning meeting.”

The new 21-mile Granby route debuted this year as the latest expansion of Winter Park Transit’s nearly 4-year-old system, called The Lift. It connects several towns and the ski resort with free rides — providing more than 523,000 of them last year in a valley with just a few thousand full-time residents.

Its success isn’t an anomaly. Even as transit systems in big cities such as Denver struggle with declining ridership, public transportation is thriving in many of the mountain towns of Colorado. Increasingly, from the Telluride area to Steamboat Springs to the communities of Summit County, these bus lines are as focused on moving around tourists as on transporting the far-flung service workers who make the towns and ski resorts run.

The state isn’t exactly a transit mecca, but Colorado carries this little-known distinction: It leads the nation in rural public transportation, with local agencies in areas with fewer than 50,000 residents serving more riders than any other state.

Colorado’s dozens of local rural systems reported 16.7 million boardings in 2017, according to the Federal Transit Administration — more than twice the totals for rural systems in second-place Michigan and third-place California. And Colorado’s figure doesn’t include the Vail town bus system, a rare service that doesn’t report its figures to the FTA because it doesn’t receive any federal funding. Its 3.2 million annual boardings would push the state’s total that year to nearly 20 million.

Mountain resort communities, which struggle with parking crunches and have workforces living across wide areas, are the drivers of Colorado’s ranking, accounting for its 15 largest rural transit systems. The leader, the Aspen-based Roaring Fork Transportation Authority, is the highest-ridership rural agency in the United States, with more than 5 million boardings a year.

Granted, rural agencies account for just 16% of the state’s transit ridership. But they excel by following the most elemental law of public transportation: Take people where they want to go.

Ridership, often free, spikes during the ski season as visitors flood resorts and their nearby towns. They also have grown outward in response to local housing affordability crises.

“This is really critical employee transit — the people who can’t afford to live in those communities kind of rely on that transit to get to work every day,” said Sophie Shulman, the Colorado Department of Transportation’s chief of innovative mobility.

More than two dozen of Colorado’s 40 fixed-route transit systems are in rural areas, according to CDOT-provided data. The rural ridership figures also include several providers of transportation for seniors.

From school buses to a proper system

Winter Park’s Lift transit system took root after local voters approved a 2% sales tax for transit and trails in late 2015. The town took over a smaller resort-operated shuttle system that had relied on old school buses, and it’s drawn on financial help from the resort, neighborhood associations, and the towns of Fraser and Granby to expand rapidly, said Michael Koch, Winter Park’s transit manager.

Winter Park’s The Lyft bus system uses U.S. 40 as a backbone and also connects with Granby, Fraser and the ski area. (Click to enlarge)

The Lift system uses U.S. 40 as a backbone, with buses arriving every 30 or 60 minutes on most of the 10 winter daytime routes. They pick up riders at stops that incorporate old ski-lift chairs. During the quieter summer months, service is streamlined.

Town officials promised a more robust system that would serve more places with upgraded buses, run them late into the night, and be more accessible to the disabled and the elderly.

Despite occasional grumbling about the area’s steep sales tax rate, several locals said in interviews that the $3 million-a-year system had delivered on those promises.

“Heck, yeah, I’m always on this,” said Tichy, who is among the area’s archetypal Colorado seasonal workers. He spends his summers working as a rafting guide in Kremmling.

On a snowy December weekday, he jumped onboard at the resort on his day off, carrying a snow-covered board. He had plenty of company that morning.

Next to him sat Dave Tindall, 56, a computer programmer from Pittsburgh. He said he chose Winter Park for his ski vacation in large part because he could get there from Denver on an Amtrak train, which lets out at the Fraser station during the week, and get around on the bus. Earlier, Lauren and Corey Schwartz, former Denverites who were visiting from Cincinnati to ski a few days, said the bus enabled them to stay at a cheaper hotel in Fraser, farther from the resort.

“(The stop) was right outside the hotel,” said Lauren Schwartz, 30. “There’s the tracker (app) that he used, so we didn’t have to stand outside very long. … When you’re coming out to Colorado, with the high price of going skiing, it’s a nice way to kind of minimize costs.”

Winter Park Mayor Jimmy Lahrman has even grander goals in mind, including expanding the weekend-only Winter Park Express ski train to weekdays. It was revived, with Amtrak’s help, three years ago.

“The transformation has just been wonderful for our community,” Lahrman said of the bus system. “It’s providing so many opportunities for employees and young people to come up and live here and not have the expense of a vehicle.”

A gondola and commuter service

Elsewhere, mature mountain transit systems have built up a combination of services. Telluride has its own bus system, while Mountain Village — at the base of the nearby ski resort — runs a gondola up from town that, with 3 million boardings last year, ranks among the state’s most-used rural transit systems.

Recent years also have brought new movement on transit at the state level. CDOT, aided by the state legislature, started the Bustang and Outrider network of regional bus service in 2015. December brought the start of “Snowstang”-branded service to Loveland, Arapahoe Basin and Steamboat ski areas.

The state is in the process of doling out $192 million in transit money that will beef up Bustang, create new “mobility hubs” connecting that service with local transit, and buttress local agencies’ transit investments. On top of that, $18 million in recently announced federal grants will go to transit agencies in Colorado, with $12 million awarded to Winter Park to cover 60% of its planned bus garage and maintenance facility.

Still, despite the outside support, smaller transit agencies face some of the same budget and operating challenges as their larger cousins, including the Regional Transportation District in metro Denver.

“What we’re having a problem with, along with many places across the state, is the shortage of drivers,” said Summit County Commissioner Elisabeth Lawrence, who serves on Summit Stage’s board.

Local snowboarder and lift operator Christian Tichy, left, from Granby, helps ski tourist Dave Tindall, who was visiting from Pittsburgh, with a few ideas on where to ski at the Winter Park ski area while riding The Lift bus on Dec. 5, 2019. The Lift is a free bus service in the Winter Park area.

Some bus services go back decades

Lawrence, an Arkansas transplant, lives in Breckenridge and says she relies on buses provided by the town and county, especially because street parking is sparse during heavy tourist seasons. It’s also a godsend for her 14-year-old daughter, Zoe.

“Here, people are working so much, and you don’t have a lot of ability as parents to run your kids around all day,” Lawrence said.

It’s a similar story in the Roaring Fork Valley, where the RFTA now operates town bus service in Aspen and Glenwood Springs, buses to the four Aspen ski resorts, a summer bus to the Maroon Bells Scenic Area, and growing commuter services to communities as far west as Rifle, nearly 70 miles from Aspen. Some of the system is free, but other routes charge fares.

Six years ago, the agency launched the VelociRFTA express bus service — hailed as the first “bus rapid transit”-like service in any rural area in the country — between Aspen and Glenwood.

“I like to refer to our system as a three- or four-ring circus,” said Kent Blackmer, the RFTA’s co-director of operations, adding that the agency has adapted to economic challenges facing workers. “The workforce has continued to move further and further down the valley, and now there are affordability issues in Glenwood Springs.”

As Blackmer takes stock, he sees the bus system — and the reduced need for parking that has resulted — as indispensable to townies and tourists alike.

“If everybody drove their private vehicles” on local roads, he said, “it wouldn’t work.”