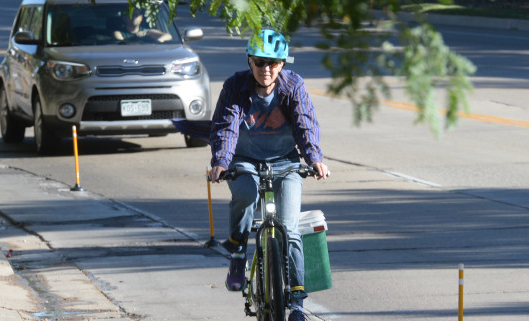 It’s not often an overnight project involving the use of plungers is met with excitement, but that’s exactly what happened Wednesday morning in Boulder after bicycle commuters on 30th Street found someone had created a makeshift “protected” bike lane using plungers.

About 100 wooden-handled plungers lined both shoulders on 30th Street between Arapahoe Avenue and Baseline Road, forming a MacGyvered barrier between vehicles on bicyclists to call attention to creating safer conditions for cyclists.

Jamie Pfahl was riding to work at about 7 a.m. when she came across the ad-hoc bike lane on 30th, which has been referred to as one of the more dangerous stretches of road in Boulder. While it was a cheap hardware store version of the protection bicyclists want, Pfahl said it was at least something to start a discussion.

“It was a dream come true,” Pfahl said. “It was like Christmas morning, but in a family where the gifts are not that great.”

Pfahl is active online when it comes to bike advocacy, so she was probably not as shocked to see plungers adhered to the road as some people might have been. Plungers have been used elsewhere in the country to call attention to protected bike lanes, and in some cases have even resulted in more permanent structures being installed.

“I knew immediately what they were,” Pfahl said about seeing the plungers in Boulder.

“I was really excited that someone did something about it,” she said. “Someone finally took action.”

But while the idea of a protected bike lane, even one made up of plungers, appealed to Pfahl, she said it does not solve all of the problems cyclists face on the narrow shoulder of 30th.

“Some people tell me I have a death wish biking down 30th,” she said. “The really telling thing would be to see how many are run over by the end of the day.”

Sure enough, by mid-morning several stretches of the road that had been flush with plungers earlier in the day had already been cleared out or snapped.

“It was pretty jarring to see that by the time I got there at 8 or 8:30 (a.m.), 10% to 20% had already been hit or run over by vehicles,” said Thomas Wells, who saw social media posts about the plungers and decided to swing by 30th to check them out. “It highlighted how narrow it is. But it did seem like cars were giving a wider berth.”

By the afternoon, Boulder crews had removed the 200 or so plungers that were still upright.

“While we certainly understand the intent and recognize that this corridor needs improvements for cyclist safety and comfort, placing any objects in the street is illegal and could present additional safety issues,” Boulder officials said in an statement. “We are also aware of other places in the country where similar tactics are being used. The city is committed to engaging in constructive ways with the community to find solutions, and we are happy to meet with any individuals or community groups to discuss areas of concern.”

Boulder spokeswoman Meghan Wilson encouraged residents also to check out the draft of the city’s transportation master plan, which will go before council on Sept. 17.

“We do encourage community members to engage in those conversations,” Wilson said. “We share the concerns and understand people don’t feel safe biking everywhere, and we’re trying to change that.”

While the improvised bollards may have been short-lived, Wells said he thinks they accomplished the goal of getting people to at least discuss the issue.

“It seemed like the response and discussion online, especially on Twitter, has been pretty great,” Wells said. “It seems like it raised awareness, and I hope it continues to do so. It’s something we need to be talking about more.”

Should RTD Cover Lots Of Ground Or Focus On High-Density Corridors? We Asked...