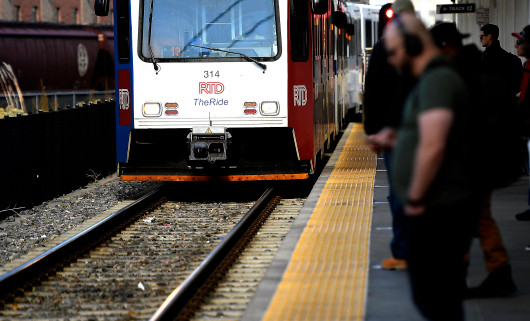 Regional Transportation District leaders on Tuesday made it clear that before any reductions are made to bus and train service in metro Denver — a possible response to a worsening transit worker shortage — the agency will need to first meet with communities in the district to elicit their input on any potential route cuts.

“We have to reach out to the stakeholders — this is not just an RTD problem, this is a regional problem,” said Director Judy Lubow, who represents Longmont.

Her colleague, Director Angie Rivera-Malpiede, said the prospect of nixed routes in the 2,342-square-mile transit district centering on Denver is dire.

“In my opinion, RTD is in crisis,” she said Tuesday night.

Late last week, RTD released a memo staff had prepared for the board of directors that bluntly stated that the driver shortage “has dramatically impacted our employees and our ability to deliver reliable service to our customers.”

“This is eroding public confidence in our service,” the memo stated.

In laying out next steps, RTD staff proposed “curtailing a significant amount of service for a temporary period in order to bring our service in-line with the amount of operators we have available…” Specific service cuts were not outlined at Tuesday’s meeting, though RTD staff is expected to draw up a list of potential reductions for the board of directors to look at on Nov. 12.

“We’ve reached a tipping point,” Director Bob Broom said. “Something has to be done to get this into balance until we can figure out how to hire new drivers and keep them on the job.”

Driver shortages have plagued RTD for years, and they have hit other transit agencies around the country too. According to a Streetsblog USA storypublished this past summer, labor shortages have also affected transit service in San Francisco, Miami, Omaha, northern New Jersey and Minneapolis.

In late 2017, Metro Transit in Minneapolis told the Star Tribune that it needed 30 to 40 additional drivers to cover all scheduled runs out of a force of 1,500 bus operators. Metro Transit had to ask drivers to grab a shift on a day off to keep buses running.

At RTD, many rail and bus operators have had to work six days a week for years running — a process known as “mandated” overtime. And because mandated shifts go largely to workers with lower seniority, “mandating is the single biggest factor affecting new employee retention,” the staff memo said.

RTD staff said that so far this year, nearly 70% of bus drivers and more than four of every 10 light-rail operators have been mandated to work one of their off days each week.

RTD points out that since 2016, it has opened five new rail lines, including the University of Colorado A-Line and the G-Line, as well as bus rapid transit service between Boulder and Denver. Starting at the beginning of 2017, the agency hired furiously to plug the gap but ended up losing 710 bus drivers and 201 train operators during that nearly three-year period, leaving RTD short 95 bus drivers out of a budgeted 1,083 drivers and short 56 light-rail operators out of 216 needed.

That problem came into sharp focus as recently as Tuesday morning, when RTD canceled multiple trips on the C, D, E, F and R lines — all light-rail lines — due to a shortage in personnel.

RTD points to the opening of the Southeast Extension in Lone Tree in May as a major reason for the recent uptick in the shortage of light-rail operators. That additional 2.3 miles of track from Lincoln Street station to RidgeGate station added 6,350 annualized hours of service and called for 20 additional light-rail operators, RTD says.

In July, the light-rail side of RTD dropped 26 trips systemwide. That shot up to 296.5 dropped trips in August.

RTD says the strong economy and sustained low unemployment have made it difficult for it to attract and retain drivers. It points to a nationwide shortage of 60,000 truck drivers as a larger symptom of the problem.

Starting in 2015, RTD says it has made a concerted effort to bring new employees on board, offering a $2,000 signing bonus and $1,000 referral bonus, advertising open positions on buses and trains and even changing the “hold” message on its customer care line to advertise jobs at the agency.

But Bill Jones, in-house counsel for Amalgamated Transit Union Local 1001 that represents more than 1,000 RTD drivers and operators, said the issue isn’t so much recruitment as retention. Plenty of drivers have walked through RTD’s doors to take a job, but many have also turned around and left, Jones said.

“The real problem is the skill set it takes to be an operator and what an employee is willing to put up with from an employer that doesn’t treat them well,” he said.

Drivers are still trying to formally nail down bathroom breaks so they don’t have to rush them at end-of-the-line stops, Jones said. Other operators have told him that RTD doesn’t show much concern for the life-work balance of an employee base that is often required to get behind the wheel on a scheduled day off.

So when a better paying job comes into view, Jones said the choice is easy.

“In this economy, people take the job — and then they turn around and leave,” he said.

Ernest Archuleta, a former RTD director, said he advocated for higher hourly pay for drivers when he served on the board. But he said his colleagues “shrugged him off.” If RTD pursues service cuts to deal with the workforce issue, Archuleta said, they could have greater ramifications on the long-term health of transit operations in the Denver area.

“A lot of people are moaning and groaning about cut service,” he said. “That’s going to hurt them.”

RTD Chair Doug Tisdale said Tuesday that any service cuts would have to have a “sunset” — or an expiration date. And he said split shifts, mandating and rest room breaks all need to be addressed for RTD workers. But he acknowledged that in the meantime RTD has a “major problem.”

“We have to get back our credibility and trust with the public and we can only do it by delivering what we promise,” he said.

CDOT has a survey to better understand the transportation needs of the comm...