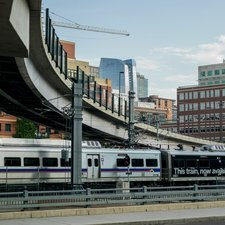 DENVER — When Julia Ellis arrives at a train station in a Denver suburb to go to work, she opens her Uber app. Next to the ride-hailing options, she taps a train icon marked “Transit.”

The click buys her a ticket for Denver’s public transit system, the Regional Transportation District. Ms. Ellis said she had used Uber to get her train tickets since the company rolled out the feature this spring. She also often takes an Uber ride to the station because a medical condition limits her driving.

“You make two clicks and you’re there,” Ms. Ellis, 54, said of how Uber and Denver’s train system had changed her commute.

Ms. Ellis is part of a widening experiment for Uber. As the company seeks new growth, it has teamed up with cities and transit agencies in the United States, Canada, Britain and Australia to provide tickets, to transport people with disabilities or sometimes to substitute for a town’s public transportation system entirely.

Since 2015, Uber has inked more than 20 transit deals. The push is now being championed by Dara Khosrowshahi, its chief executive, to turn the company into the “Amazon of transportation.” In that vision, Uber would become a one-stop shop for car, bike, scooter, bus and train trips.

Doing so would help Uber draw more riders, especially as the company faces questions from Wall Street about whether it can make money and revive its once red-hot growth rate. On Thursday, Uber is scheduled to report its latest earnings, including an estimated quarterly loss of nearly $5 billion and declining revenue growth.

“When you’re taking your phone out of your pocket and deciding where to go, we want to be the first place that you go to,” said David Reich, an Uber director who heads the team that the company formed last year to focus on public transportation.

Uber has pitched itself as being able to provide cheaper and more flexible transportation, especially in locations where public transit is scant. But mixing ride-hailing with their own services has left some city officials uneasy.

The public transit ticket option in Uber’s app is denoted by a train icon. Riders in Denver can also use the app to obtain train and bus schedule information.

The public transit ticket option in Uber’s app is denoted by a train icon. Riders in Denver can also use the app to obtain train and bus schedule information.Terry Ratzlaff for The New York Times

With transit ridership falling in major metropolitan areas across the United States, agencies said they risked ceding even more passengers to Uber and similar services, like Lyft. The authorities have also criticized Uber for not sharing enough rider data, which could help agencies plan new transit routes.

Cities also worry that Uber and Lyft could increase congestion. A recent study commissioned by the companies found they were contributing to congestion, though they are outstripped by personal vehicle use.

“There are real questions about forming partnerships that may end up pushing riders away from public transportation,” said Adie Tomer, a metropolitan policy fellow at the Brookings Institution, who studies infrastructure use. “It’s a dangerous game for transit agencies to make agreements with ride-hailing companies.”

In a filing in April, Uber stoked competitive fears by saying it aimed to replace public transportation altogether. The sentence was replaced in a later filing with a promise that Uber would integrate public transit into its app “as an additional low-cost option.”

Lyft has also moved into public transit. It began offering free rides to a train station in a Denver suburb in 2016. Now it has 50 transit deals in the United States, including a partnership with the Los Angeles Metro in which Lyft car pool riders can earn free credits to take public transit.

“We see ourselves as supportive of the transit industry and want to see the transit ridership grow and increase around the country,” said Lilly Shoup, Lyft’s senior director of policy and partnerships.

Uber’s public transit partnerships vary by place. But with most of the agreements, cities tap the company’s network of drivers to provide rides in areas that do not have reliable bus routes. Cities often subsidize the rides so that passengers pay what amounts to a bus fare rather than a typical Uber fee. Uber generally earns a subsidy from the transit agency, a fare from the rider or both.

In Denver, the partnership is centered on ticketing rather than car rides. Through Uber’s app, people get a new way to buy tickets and obtain train and bus schedule information. Uber doesn’t make money selling the tickets, but it benefits when ticket buyers, like Ms. Ellis, stay in the app to book a ride from the train station to their destination.

One of Uber’s earliest partnerships was in 2015 with Dallas Area Rapid Transit. That year, DART agreed to temporarily display Uber rides as an option in its app during St. Patrick’s Day festivities. The promotion, intended to give boozy celebrators more choices for getting home safely, became so popular that DART eventually integrated Uber into its app permanently.

DART now subsidizes shared Uber rides within a few miles of several public train stations. The agency estimated that it spent $15 per rider when it ran bus routes in those areas; now it saves money by paying Uber less than $5 a person.

Dallas transit officials were initially cautious about the partnership, they said. “For a while they ignored us. Then they cannibalized us. Now they want to work with us,” Todd Plesko, DART’s vice president of service planning and scheduling, said of Uber and Lyft. “It’s the kind of market for trips they never did before.”

Uber was also hesitant to share data about riders and routes, citing privacy concerns. Mr. Plesko said Uber had mentioned the hunt for Osama bin Laden as an example of how individuals could be identified from their data. (Uber said no one had used a Bin Laden reference.)

“If we’re going to survive as an agency, we have to be willing to innovate and take risks,” he said.

One place that has used Uber as an alternative to public transportation is Innisfil, Ontario. In 2017, a consultant told Innisfil, a town of more than 37,000, that it would cost about 35 Canadian dollars, or about $26, per ride in subsidies to start a bus route that covered only 5 percent of its geography and provided 16,000 rides a year. Along with costs like buses and bus shelters, the total cost would be 561,000 Canadian dollars, or $422,600, city officials said. They said that seemed too expensive and would not provide enough coverage.

David Genova, chief executive of the R.T.D., at Denver’s Union Station. “I wouldn’t call it envy,” he said, “but my colleagues around the country are very, very interested in this.”Terry Ratzlaff for The New York Times

Uber offered Innisfil cheaper rides that could go many places rather than follow a set route. The company now provides car pool rides to residents in place of a bus system. Innisfil pays Uber about 9 Canadian dollars, or $7, per rider.

“Large municipalities sometimes see ride sharing as their enemy because it’s taking away from their ridership,” said Lynn Dollin, Innisfil’s mayor. “We’ve taken a different approach and embraced it.”

The new transit system became so popular that Innisfil went over its budget in what it paid Uber, she said. In April, the town increased the rate it charges people by 1 Canadian dollar for an Uber ride to between 4 to 6 Canadian dollars. It also capped the number of rides that residents could take each month.

Denver’s Regional Transportation District agreed to work with Uber this year because “the No. 1 intriguing thing was opening up this market,” said David Genova, the agency’s chief executive. Ride-hailing apps are ubiquitous, he said, giving R.T.D. an opportunity to easily put its offerings in front of tourists who might be looking for an Uber.

R.T.D. has sold more than 3,500 train and bus tickets through Uber, a tiny fraction of the agency’s 322,000 daily rides. But Mr. Genova said he was optimistic, with the number of tickets sold through Uber increasing about 29 percent a week from the beginning of June through the end of July.

“Everybody wants to know: How did we do this?” he said. “I wouldn’t call it envy, but my colleagues around the country are very, very interested in this.”

Kate Conger is a technology reporter in San Francisco, covering privacy, policy and labor. Previously, she wrote about cybersecurity for Gizmodo and TechCrunch. @kateconger