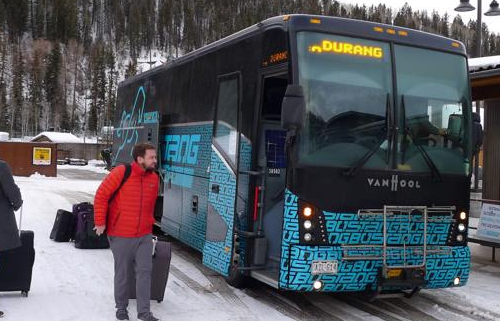 In densely populated urban areas, it’s nearly impossible to imagine not being able to easily get where you want to go. Indeed, in New York City (where this reporter lived for years), there are innumerable choices when it comes to transportation: Lyft, Uber, taxis, buses and subways, all competing to offer you a ride, wherever you please.

But in the vast landscapes of the rural West (read: the San Juans), the situation couldn’t be more different. Here, if you don’t own a car — or at the very least, have access to one — you’re sunk when it comes to reliable transportation. There is no quick, easy way between, say, Durango and Telluride, or Placerville and Grand Junction, unless you drive there yourself (or pay someone to take you). The distances are simply too great.

Yet change has arrived, and more is on the way. Over the past few years, Colorado has applied both brainpower and horsepower to the challenge of “connecting the dots” between those who live in rural places and the medical care and other services they may need outside their small community. “Bustang” — a name that conjures not only bus transportation but the state’s iconic western landscape, wild horses and its beloved Denver Broncos, all in one fell swoop — was created by CDOT and the state legislature in 2015. It’s been a big success: Over four years of operation, annual ridership has more than doubled on the state’s bus line, from 102,503 in 2015-16 to 238,252 in 2018-19. To buttress growth, new services have been added, such as additional stops on weekends, a “Rams Route” between the CSU community and Denver, and in 2018, perhaps the biggest change of all: “Bustang Outrider,” aka Son of Bustang, a service that attempts to link outlying rural communities to the Front Range, and Amtrak, Greyhound, and DIA. Last summer, dozens of representatives from rural communities — including Grand Junction, Montrose, Ridgway, Telluride and Durango — sent a letter congratulating CDOT’s transportation commissioners on Bustang’s success connecting communities not only up and down the Front Range, but “beyond the I-70 and I-25 corridor” through Bustang Outrider.

“Coloradans need travel options to get around the state, and the steady growth in Bustang ridership demonstrates that it is providing critical service,” the letter read.

“I used to work at Purgatory,” Nesbitt recalled. “No one carpools. On ‘kiddo’ days,” where the resort offered special prices for ages 7 and under, “you’d have, like, one little kid for every car, and all these parents hanging out.” Route 160, on the way north to Purgatory, from Durango, was busy twice daily no matter the snowy weather, and parking was difficult. Mass transit eases traffic congestion in mountain resorts, and Telluride has been on-board with the idea for years: the Galloping Goose and SMART buses ferry passengers around town, Down Valley and to Norwood, and the gondola offers 3 million passenger rides every year between downtown and Mountain Village.

CDOT recently announced that it will add another Bustang Outrider route, between Grand Junction and Telluride, starting early next year.

Bustang is “basically entirely paid for by federal funds,” Prilwitz said, and communities have to want the service to be there. Not every place does. The City of Alamosa reportedly pushed back against the idea of Bustang arriving, but “we received a petition with about 500 signatures” from residents of Crestone (along the Alamosa route) who did want a Bustang Outrider to provide services between the small town of Moffat and Denver. “There was a standing-room-only meeting in town hall, with a lot of Buddhist monks,” Jeffrey Prilowitz, CDOT’s Bustang Outrider manager recalled. “Many people travel to Crestone for the spiritual centers. Others live in the Baca Grande housing development outside town. They keep a car there, but wanted to be able to ride the bus into Denver for business.”

The myth persists that “only bad people ride buses. But that’s not true,” Nesibtt said. “We see all types of people on Bustang.”

Indeed, some of the results of CDOT’s surveys about bus ridership might come as a surprise: “The average income for a rider between Fort Collins and Denver is $100,000,” Prilowitz said. “We’ve had passengers who own their own planes in Aspen, but they’ll take the bus to Denver for a meeting” rather than dealing with a drive through the mountains in uncertain weather. “It’s easier and quicker,” Prilowitz said. “We see quite a few people who fly from Europe into Denver and take the bus to Gunnison. They get off at Salida, which has really marketed itself for mountain biking.

“The intent of Bustang Outrider was to help people who live in rural Colorado get medical care in Denver,” Prilowitz said. “Access to essential services is the phrase we use. People on the Front Range don’t always seem to realize just how remote parts of Colorado are. A number of people ride the bus to Denver to buy a car, and drive back home.”

On the Western Slope, Bustang’s conveyance is a bright purple, 35-foot coach from Belgium by a company called Van Hool.

“No U.S. companies built a 35-footer when we first began looking for them,” Prilowitz said. “Now the state has a sales contract with them,” and all new buses will be Van Hools. A second coach will be added next month. The bus travels from Durango seven days a week to Grand Junction and back, with stops in Mancos, Cortez, Dolores, Rico, Telluride, Placerville, Ridgway, Montrose and Delta in between. (One route it will not take — even if there is inclement weather on Lizard Head Pass — is the long way around, from Durango to Grand Junction via Red Mountain Pass. “It’s a big no-no,” Prilowitz has said, although “a passenger-less bus did take that route when it needed to get to Grand Junction for servicing.”)

There was an accident on the Durango-Grand Junction route in the past year, in a place and time one might expect: near the Alta Lakes turnoff (just down from Lizard Head Pass), in a spring snowstorm.

“A southbound big-box delivery truck was going too fast for conditions,” Prilowitz said, “and was heading straight for the bus. The driver saw it, and had the bus stopped by the time it got hit. Telluride Express, the parent company that runs the Gunnison-Denver route, put passengers up in Telluride for a few hours, got them pizza and transported them later that day to Grand Junction” (the truck driver was cited for reckless driving).

“The bus driver was the hero,” Prilowitz said. “The route’s good. There were a couple days last year where they had to cancel because of weather, but otherwise it’s good.”

In the experience of this reporter — and two comrades, who each rode Bustang Outrider on separate weekends last year — the route is definitely good. Two Saturdays ago, I boarded the bus for a trip from Ridgway to Grand Junction. The most difficult part of my journey was figuring out where to board: there’s no formal bus stop yet — signage will come soon, Prilowitz said — but the schedule and route information (posted online at ridebustang.com) advise that the pickup spot is the “Ridgway Area Chamber of Commerce/Museum” on Highway 62, so all I had to do was stand and wait for a big, black-and-blue bus to make its along Sherman Street through downtown Ridgway to pick me up.

The bus arrived right on time, at 10:25 a.m. Jay Rhodes was the driver that day, and Erma Linda Begay, who has driven for Greyhound, was along for the ride, in training to become another Bustang driver. The route between Durango and Grand Junction “is tough,” Nesbitt said, and Rhodes agreed. (“All morning we’re going uphill, through canyons where there’s no cell service and a huge variety of weather,” Nesbitt explained. “It’s freezing cold, and by the time you get up to Grand Junction, everything’s melting off. You turn around, and everything’s freezing up again, and you’re driving home in the dark. It’s hard on equipment and drivers.”)

“We probably have the longest Outrider route,” Rhodes said. Drivers find it challenging, but “kids love it,” Rhodes said, and passengers appreciate the Van Hools’ free WiFi and outlets for plug-ins, bathroom, and ample space for luggage and bicycles. Despite the abundance of wildlife along the route, Rhodes hasn’t hit any wildlife.

“I’ve seen lots of elk, deer, bear, bighorn sheep, and a white wolf outside Trout Lake,” he recounted as we rolled along. “I’ve seen dozens of bald eagles along the Dolores. They’re awesome.”

Most drivers are aware of how strenuous a route it can be, Rhodes said.

“We sit them down and explain, this is one of the longest routes Bustang has. We work a 13-14 hour day.”

The bus departs its warehouse at 5:30 a.m. for a 6:40 a.m. pickup in Durango, and arrives back in Durango at 7:10 p.m. the same evening. At present, there are four drivers working the route, and Rhodes hopes to hire another one.

“Of all the places I go, Montrose is the craziest” when it comes to drivers, he said. “Things get a little sketchy. I’ve had drivers I come up behind” who seem to deliberately slow down, and then speed up when Rhodes attempts to pass them. It’s a cat-and-mouse game that Begay said she’s also witnessed during her tenure at Greyhound, and which this reporter watched play out along the road outside Montrose.

“We all know there are people out there who will try to get you in a wreck with a bus, so they can collect money in a lawsuit,” Rhodes said (Begay nodded). That was the most stressful part of the ride (the truck eventually exited US 50). The most sublime was the scenery: canyon country as glimpsed from high above the road. (In autumn, along on the route between Rico and Telluride, the bus occasionally seems to drive so close to the aspen trees, “It’s like you’re in a forest of gold,” Nesbitt said.)

The most inspiring part of our ride was when, following a brief rest stop in Montrose, Rhodes exited in search of a passenger who’d lingered a little too long in a fast-food place, to let him know it was time to get back on the bus. It was a level of concern you never would have witnessed in an urban setting.

The moment that made you realize bus service is here to stay on the Western Slope also took place in Montrose, when Jack Johnson, a retail district manager for Target, hopped on board. Johnson lives in Grand Junction, where he keeps his car. He’d just flown in from Montrose.

“This is super-convenient,” he said of Bustang. “When I’m in Europe, I take buses quite a bit.” With that, he popped in his earphones and began checking his email, working as Rhodes began driving. And we were off.

What new tech and services are transit agencies implementing?