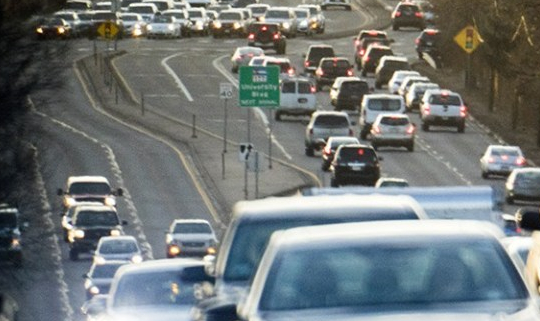 A contentious 2017 decision by the Denver City Council has rippled into a new plan by the Hancock administration to make developers promote walking, biking and transit when they build stuff.

A quick rewind: Back in 2017 a split council voted to make homebuilders include parking with their projects where it previously wasn’t required. The electeds who won said they were simply responding to constituents who feared apartment buildings with no private off-street parking would squeeze them out of the available publicly owned curbside spots. Other council members said forcing developers to build expensive parking spaces — they can cost tens of thousands of dollars per stall — would raise housing costs and generate more driving trips.

Fast-forward to 2019: At the direction of council members who claimed Denver’s non-car options were too sparse to forgo new parking spots, Denver Public Works began developing a “transportation demand management” program. That’s a nerdy way of saying that if developers want to build places that will attract more people, they will have to promote other ways to move around than driving.

Incentives to finding sustainable transportation include things like providing RTD passes for tenants and condo owners or funding a B-cycle station onsite. Disincentives to driving include charging for parking.

“This doesn’t necessarily mean that every single person needs to be on a bus or bike but if we offer better choices … then we can better use our existing infrastructure,” said Zach Wallace Mendez, who manages the program for Public Works. He spoke in front of the City Council’s land use and transportation committee on Tuesday.

Growth generates demand for our streets and pollution in our air. Influencing travel behavior with carrots and sticks is one tool in Public Works’ toolbox that can give people a way out of congestion while reducing harmful emissions, according to the streets department.

Still, Wallace Mendez said it’s a “mitigation tool” and “I certainly don’t want it to oversell itself.”

One potential hitch: ensuring developers make good on their end of the bargain.

The city’s strategy is still in draft form, but as of right now new buildings would have to build some type of sustainable transport infrastructure, onsite or off. Residential buildings with at least 45 homes and commercial buildings of at least 50,000 square feet would have stricter requirements — like commuter surveys to measure the program’s impact.

A website will take all the elements of a given project and spit out a non-single-occupancy vehicle commute rate that developers — and later property managers — need to achieve. Then they’ll choose from a menu of options. They will be responsible for managing their programs and reporting the results to the city government.

‘I still am really curious about whey we’re gonna let the developers do their own monitoring,” CdeBaca said, adding that the city needs ways to ensure compliance.

But enforcement is a matter of resources, Wallace Mendez said: “Currently the program is me.”

Denver is behind peer cities, including the perennial urban transportation champions, Seattle.

“We’re not the only city doing this,” Hillhouse said. “A lot of other cities, peer cities, are quite ahead of us.”

Seattle and Washington state have had a transportation demand management program for decades. The city is growing at a rapid pace like Denver, yet even as it’s added thousands of people, Hillhouse said 90 percent of the city’s net gain in trips were made by walking, biking and transit.

Less than half of Seattle commutes, about 47 percent, are done solo in a car, according to 2017 census data. The city’s TDM strategy is only one reason for that figure — its density and robust transit system are bigger ones.

If all goes according to plan, Public Works hopes to implement the program in spring 2020.

Can commuter rail save our suburbs?